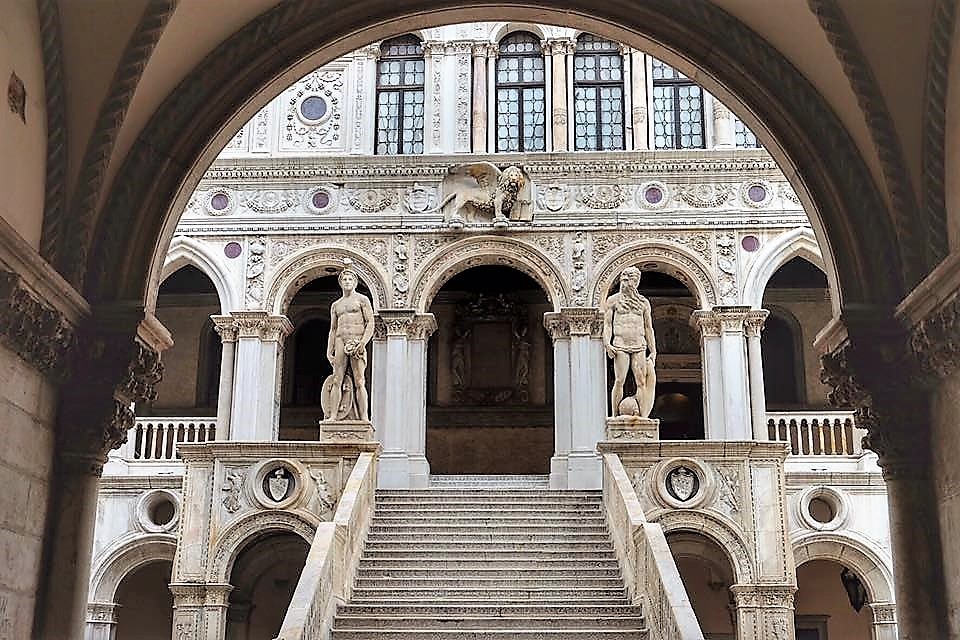 The Doge's Palace (in Italian:Palazzo Ducale) is a palace built in Venetian Gothic style and one of the main landmarks of the city of Venice in northern Italy. The palace was the residence of the Doge of Venice, the supreme authority of the former Republic. It was built in 1340 and extended and modified in the following centuries.
In 1485 the Great Council decided that a ceremonial staircase should be built within thw courtyard. The design envisaged a straight axis with the rounded Foscari Arch, with alternate bands of Istrian stone and red Verona marble, linking the staircase to the Porta della Carta.
Since 1567, the "Giants' Staircase" (in Italian: Scala dei Giganti) is guarded by Sansovino's two colossal statues of Mars and Neptune, which represents Venice's power by land and by sea and therefore the reason for its name.
For more information visit: https://palazzoducale.visitmuve.it/en/home/
https://en.wikipedia.org/wiki/Doge%27s_Palace
See also: https://www.inexhibit.com/mymuseum/doge-palace-venice-palazzo-ducale/
Ετικέτες Doge's Palace Europe Italy Venice