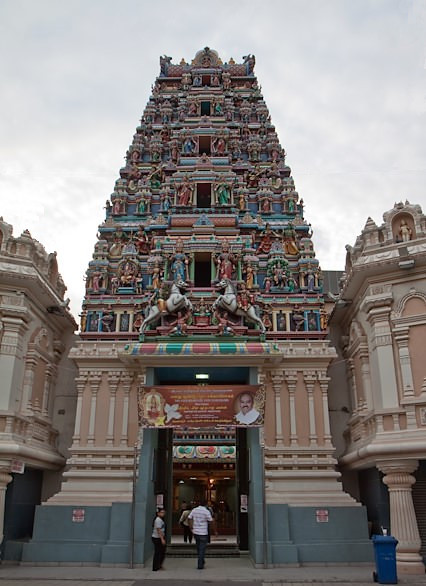 The Sri Mahamariamman Temple is the oldest Hindu temple in Kuala Lumpur, Malaysia, situated at the edge of Chinatown in Jalan Bandar area. It is also reputed to be the richest Hindu temple in the country.
The Sri Mahamariamman Temple was founded by K. Thamboosamy Pillai in 1873 and was initially used as a private shrine by the Pillai family. The family opened the temple to the public in the late 1920s and eventually handed the management of the temple over to a board of trustees.
Built in the South Indian style, the temple's most outstanding feature is the impressive 5-tiered gopuram (tower). It is the tallest structure in the temple. The 22.9 m (75 ft) high pyramid-shaped gate tower is decorated with depictions of Hindu gods sculpted by artisans from southern India.
The temple was originally sited somewhere near the Kuala Lumpur railway station. It shifted to its present location along Jalan Tun H.S. Lee (next to KL's Chinatown) in 1885.
Ετικέτες Asia Kuala Lumpur Malaysia Sri Mahamariamman Temple TEMPLE